When I was a youngster, I received an airgun for my eighth birthday, and it became the central focus for many an adventure that I went on during that time in my life. I learned to hunt with that air rifle, long before I ever carried a real firearm in the field, and I know that is true for many others of you out there. My Daisy 840 and me were inseparable, and the worst punishment in the world at that time, was to get my BB gun taken away. In this post I’m going to discuss two airguns that I have, and what they are used for.

Years ago I had decided that there are two reasons why I would have airguns in my inventory and those were training, and hunting small game. Fast forward to a few years ago. At that time I was looking at preps for a bugout scenario, or a scenario that involves not having firearms available. I had owned a Crossman 1377 pistol (this is the newer model still available) back in the early 90’s, and ended up trading it off for something else that probably got traded off for something else…… Long story short, I know that I had shot a number of squirrels and rabbits with that 1377 pistol, and I said “Why not?”, and ordered one.

One of the things I wished I’d had back then was a shoulder stock. The 1377 pistol is designed to take one shown here, and the rear sight actually flips upside down so you can use a peep sight with the shoulder stock attached. 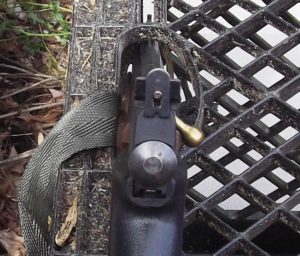 Crossman 1377’s flip over rear sight. A peep sight makes perfect sense if you have a shoulder stock.

The Crossman 1377 pistol is a pump air gun. With 10 pumps it develops 600 feet per second in muzzle velocity. 600 FPS muzzle velocity is considered plenty of velocity for an airgun to kill small game such as rabbits and squirrels (At 25 meters, the pellet is going around 450-500 fps), as long as you can place the shot accurately in the head (yes, you can kill it if you hit their heart, but it is a harder, small target to define the location in their chest). The 1377 is plenty accurate enough at 25 meters to hit “Minute of Squirrel Head”, as can be seen in the below photo.

Three shot fired from an improvised rest (I was resting my side against a vehicle, and my support hand on the side of the quarter panel). I’d say that’s “Minute of Squirrel Head”. A quarter is 1 inch.

A weaver type scope base is available for this air gun, but one of the reasons I wanted this air gun was due to how compact and lightweight it is. A scope would add to the weight, and take away from it’s compactness. The irons are plenty accurate. It is easy enough just to strap this air gun to the side of a ruck, and forget it is there until you need a quiet game getter.

Which one is real?

So we’ve discussed my choice for a packable small game air gun, now lets talk about the “trainer” I use. A few years ago, I came across a CO2 powered air rifle being sold under the Winchester name. It is called the M14 (read the reviews here to get an idea of what people think of it), and as the name implies, it’s the spitting image of it’s cartridge firing namesake.

The reason I bought this rifle was to have an air gun that had the feel (grip, safety, etc. but at around 4 lbs, not the weight), shape, and sights of a military rifle (they would make a killin’ if they made this for FAL’s, etc.). This rifle is plenty powerful enough to kill squirrels and rabbits, but it’s main purpose is as a trainer. I am not a fan of CO2, but nothing else will give you the ability to take multiple target snap shots without some form of cocking or pumping mechanism. This rifle would be the perfect clandestine trainer for a resistance group in a city, or a Survivalist group in the country that doesn’t want to give away their position by firing actual firearms (don’t want to attract the “zombies”, right?) and use M14 type rifles as their rifle pick.

The CO2 cartridge holder with the key that torques the cartridges into the piercing mechanism.

Besides the normal M14 type “mag catch” there is another catch below that one (on the back of the fake mag) to keep from having the CO2 holder fall onto the ground. The CO2 cartridges also operate the charging handle mechanism (yes, it reciprocates).

The eight shot cylindrical magazine. There is an identical 8 shot cylinder on the other end of the magazine as well.

The 16 shot magazine being placed into the mag well. The mag release is the button on the left side of the rifle, just below center (left side in picture) on the fake “Mag” that is pictured.

Front sight in a standard military rifle configuration. It’s a little wide (approximately the width of a tritium M14 front sight), but I didn’t get it as a target rifle. I could easily file it down on both sides (it’s plastic) if I wanted more precision, but I also am keeping it’s intended use in perspective.

The rear peep is plenty small enough for accurate shooting.

Some key points to remember. First, it’s not a target rifle, but is still pretty accurate. Two, it mimics enough of the features of the M14/M1A military rifle to make it beneficial in training (get an air rifle with controls like your defensive rifle), especially if you run an M1A (here’s just one AR version). Three, running on CO2 (buy them in bulk, $22 for 40), and pellets is still a lot cheaper than firing centerfire cartridges or even .22LR.

Last, but not least on our list of things to cover is ammo. In this case, I can use either BB’s or .177 caliber pellets for either air gun I’ve mentioned (can’t do that in the high end pellet guns). I use the 7.4 grain pointed pellets for hunting with my 1377, and I use both the pointed pellets, and BB’s out of my “M14”. Considering that BB’s are about $3.50 for 2400, and the hunting pellets are almost $4 for 250, it makes sense to train with BB’s, and not hunting pellets. However, the “M14” is plenty accurate with the hunting pellets, in case I needed to use it to hunt with. 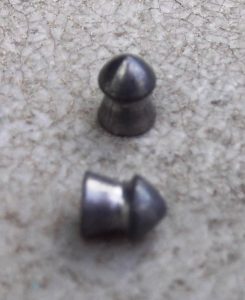 Do I have or use some of the higher end Gamo, Beeman, or RWS air rifles? No. I don’t have a problem with those kinds of air guns, and I’ve heard they shoot accurately, and are very hard hitting. For me, they just don’t fit into what I need an air rifle for. Those rifles are full size, full weight tools, and I don’t see myself hunting for small game with a full sized air rifle in my hands, while having a full sized defensive rifle on my back (don’t leave home without it in TEOTWAWKISTAN). As I said in the “Blackpowder” post, this is an option to go to instead of cartridge firearms, that is all. Options are choices. More choices make survival more certain.

Gamo has earned a good reputation in the air rifle market. They are generally economical, durable tools that fit a niche in the preparations  of some Survivalists

For something around your retreat domicile, there is probably nothing better than one of the Gamo rifles I’ve seen advertised. I’ve heard from friends that they are super accurate. The velocity thing only goes so far (once you get above the speed of sound, you give up the quiet advantage of an air rifle). If that is what you’re looking for, This rifle from Gamo is probably the ticket in price, and capability. The description is a little misleading, since the 1200 fps velocity they are talking about is with PBA ammo (super light pellets), and it actually shoots lead pellets at around 1.000 fps, here’s the Gamo link. If I buy an air rifle of this type, this will probably be the one I buy.

This is just one more tool to think about for your preps. Do you have to have an air gun? No. Can it make certain situations more survivable? Yes, it can. Weigh your options (literally), and draw your own conclusions. As I’ve said many times, these are my experiences with the different tools I’ve discussed. Your mileage may vary.

3 thoughts on “Some Airgun Options For The Survivalist”