I was asked a while back if I thought a semi auto rifle like the AR or AK was a good “Anti riot” gun. My response was that although either of those rifles would do fine, I was a bigger fan of the 12 gauge shotgun, specifically one designed with an extended magazine, rifle sights, and is designed to mount a bayonet.

The individual started laughing and said “I don’t see myself doing a bayonet charge, Sarge.” To which I replied, “Do you know of any other firearm that is designed for close in defense, can fire non lethal ammo like rubber balls, pepper dust, or pepper balls in the same repeatable way you can with lethal ammo, can accurately hit and drop a man sized target at 100 meters, and can immediately and effectively disable a vehicle engine with accurate hits?” His answer was “No.”.

Is the shotgun the “be all end all” of fight stoppers? No. Is the shotgun the most versatile weapon available to the average consumer that might get caught in a riot situation? Yes. I have an old friend that had a guy come at him with a knife, and from about 20 feet away, his partner shot the guy in the center of the chest with a full power, 9 pellet, buckshot load. The guy survived the hit. 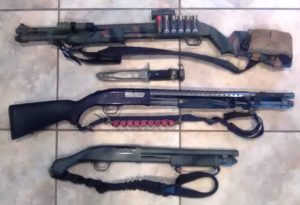 The shotgun isn’t necessarily a “Death Dealer”, but it generally is a “Fight Stopper”. Do you think that shooting a rioter from 50 meters would be justified in a court of law? Probably not. Do you think you would be justified firing a “Pepper round” in that direction to redirect those individuals from coming in your direction? Maybe, maybe not, but you can show your intent to not shoot to kill someone unless absolutely necessary was there.

There is also something funny about a bad guy hearing that distinct click-clack of a pump shotgun’s action being cycled and it involuntarily causing their rear orifice to slam shut upon realizing what it is. I’ve seen grown men stop in there tracks, then turn and run away when hearing that sound. Let me tell you something, when you’re the guy it is covering, it is an awesome sound of relief.

There are a number of good anti personnel buckshot loads out there. Everything from #4Buckshot (.24 caliber) to OOBuckshot (.33 caliber) and OOOBuckshot (.36 caliber) in either 2 3/4 inch standard or low recoil (usually has 8 or 9 OOBuck pellets instead of 9-12 OOBuck pellets in the standard load) or 3 inch magnum (up to 15 OOBuck  or 10 OOOBuck pellets). The #4 Buck has between 34 and 41 pellets in the load depending on if it’s a 2 3/4 or 3″ Magnum shell. OOBuck, OOOBuck and #4 Buck tend to be the most popular sizes of buckshot used, and most law enforcement and military ammo is OOBuck or slugs. 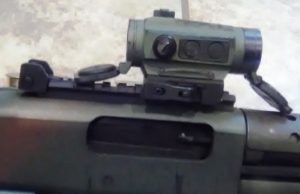 But JC, why would I need to have slugs available for a shotgun in a riot situation? Well, although I have practiced privately and professionally shooting a hostage drill scenario with buckshot, I would much rather take it with an accurate slug. I also would want to be able to fire slugs instead of buckshot at a car that was getting ready to ram a makeshift barricade in my neighborhood or my dwelling. In my riotguns (bead or ghostring sights), I use Brenneke slugs of both the 2 3/4 and 3 inch variety. Below is some ballistic info for both. 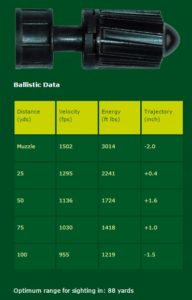 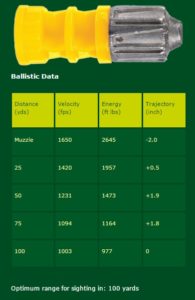 The black slug on the left is the Black Magic Magnum and weighs 1 3/8 oz. The lead slug/yellow wad on the right is the Brenneke K.O. and weighs 1 oz.

As said earlier, I suggested having the ability to mount a bayonet on your riotgun. But JC, that seems kinda ridiculous. Maybe, or maybe not. If multiple bad guys are coming through your front door, wouldn’t it be nice to not only have a blunt trauma capability (buttstroke), but a lethal force ability beyond just the shotgun shells in the magazine of the riotgun? So now we’ll talk about the Mossberg M590 nine-shot shotgun.

This Stoner bayonet attaches to the sheath via a hole in the blade that lines up with a pivot point that protrudes at the bottom of the sheath.

The wire cutter in the fully closed cutting position.

The saw on the blade is actually more practical than the average survival knife saw.

The sheath the Stoner bayonet has, incorporates a quick release belt attachment

I bought my first M590 back in ’88, and other than having to square up the angle on the end of action bars from doing a lot of shooting, I have never had any issues with any of the M590’s I own, even after many thousands of rounds fired through them. I also carried a M590 (18.5″ barrel, 6-shot) along with my M4 in Iraq, and never had a malfunction or concern about trusting my life to it.

Why am I a big fan of the M590? First, it has been the military issue shotgun for almost 30 years, and has seen a lot of use without much in the way of complaints. Second, I’m a lefty, and the safety is completely ambidextrous. This type of feature is a big deal, and not just to lefty’s. You should train to fire your long guns off of each shoulder, and having a safety that is able to be manipulated with either hand can be very helpful.

Accessories for my riotguns are generally pretty spartan. I won’t have a defense shotgun without a sidesaddle if it’s available for it. There are a number of different types of sidesaddles available now, but I can tell you that I have had one on mine for over 20 years, and it still works well. Next up is a light. I use the same light I use on all my long guns, and that is the Surefire G2 light with this pressure switch. I use a clamp designed to hold the light to the magazine tube.

One of my M590’s (pictured) has a Magpul stock and forearm. A Spec Ops shotshell pouch is attached to the side of the buttstock and holds 12 rounds of buckshot. I carry 6 slugs in the Sidesaddle. I would recommend that if you carry less lethal ammo for your riotgun, that you carry them (and only them) in that location. When you think about it, if you are carrying lethal ammo in the Sidesaddle, you have 21 rounds of buckshot, and 6 rounds of slugs, and that’s just on the gun.

Finally, the bayonet. A Mossberg M590 will take any standard M16 bayonet. The bayonet I usually use is one I’ve had for decades. Some will recognize it as a bayonet designed by Gene Stoner for his rifles. It has the wire cutter device and a small tooth saw that is actually much better for that type of cutting than some of the other knife blade spine saws out there.

Do you need a Mossberg M590 with a bayonet? No. There are plenty of well made shotguns out there that will do well in that roll, but very few have the ability to attach a bayonet in it’s stock configuration. The Mossberg M590 is a good value for the money, and is one of the best deals on the market.

What about a rifle with a bayonet? Well, they are available, but unless you get something like an M1A with a standard stock configuration, performing the battery of arms for a bayonet drill with something like an AR15 requires you to relocate your firing hand from the pistol grip to the wrist of the buttstock. A standard M1A is a great rifle, and would perform as well or better than most other rifles in this role. The primary disadvantage of a rifle like a standard M1A is it’s size. In this case however, the M1A’s size might be a huge asset.

Top is an M590. Bottom is a Match M1A. Both work very well with a bayonet attached, and make great blunt force weapons (buttstock) using the manual of arms for use of the bayonet. The scope on the M1A has a QD/ZH SEI mount, so taking it off and returning it to zero is not a problem.

Considering the situations that have presented themselves over the last few years, if you have not thought about how to handle things like a riot in your neighborhood, you are lacking in a realistic perspective for preparedness. When they want what you have, all they have to do is wait for something to happen to give them the “excuse” (it doesn’t have to be right or make sense to us, they just need the media or liberals to forward it as “righteous”, correct?).

A lot of guys will try to make out that “Old School” doesn’t work simply because it’s “Old School”. Riots ARE “Old School”, and discounting techniques or equipment because they are not “High Speed” is ridiculous, and the sign someone fixated on what’s popular, not what’s useful. Right or wrong, Robert Roger’s Standing Orders are just as valid in context today as they were when he wrote them in the 1750’s. Keep that in mind when you are evaluating equipment and techniques for defending yourself and your loved ones.

15 thoughts on “The Riotgun And The Bayonet”