So what are you planning for? Are you planning to “bugout” to the hills at the first sign of societal trouble? Are you planning to stand fast, and defend hearth and home against the entitlement zombie hordes? Are you planning to thwart the evil empire’s designs on your community, as a member of the militia? Are you basing your preps on some fiction or non fiction book you read that gave you an idea for what might happen? There are plenty of scenarios out there, some plausible, some, not so much, but the important things are these. 1) Do you have general. realistic preps in place. 2) Do you have a solid, well thought out and realistic plan to deal with the general and specific concerns you’ve identified. 3) Are you physically and/or logistically equipped and able to carry out the planned responses to these threats. We’ll talk about these three things in order.

1). Do you have general, realistic preps in place? Obviously, it doesn’t do any good to be armed to the teeth, if you don’t have plenty of food and other goods stored away. As I’ve told plenty of people in the past. If you know someone whose only preps are weapons and ammo, STAY THE HELL AWAY FROM THEM!, and for God’s sake, don’t tell them about your preps. Where do you think they’ll come first?  General preps would be items that would be stored specifically for use in any emergency, whether it’s a localized natural disaster, or WW3. Storable food, first aid supplies, shelter (environmental and defense) building material, firearms and other weapons and tools for defense/hunting chores, etc are just some of the general items you will need to cover a wide range of emergencies. By “realistic” I will use food as an example. Although we’d all love to have multiple years worth of MRE’s, or freeze dried food put back. The reality for most of us is this. Those types of meals are specialty items for specific instance like bugging out, or any other time weight and/or space is at a premium. Canned goods, whether they are done by you or bought at the store, are not only more economically viable, but in the case of the store bought canned goods, are more durably package, and the home canned items are healthier.

2) Do you have a solid, well thought out and realistic plan to deal with the general and specific concerns you’ve identified? What is your fear? The government becoming tyrannical, and making Matt Bracken’s “Enemies Foreign And Domestic” series come true? The same government destroying the economy and causing a depression like event which spirals into a “Patriots: Surivive the Coming Collapse” situation? How’s about the natural disaster scenario in “Lucifer’s Hammer” , or the nuclear war in “Alas Babylon” (2 personal favorites of mine)? No matter what the scenario, as long as you are being realistic (I know the last two election proved the existence of zombies, but the actual “Walking Dead” version is not realistic) as to the possibility of it happening, you need to make a plan for dealing with that eventuality, and your mindset is one of the most important things to assess and keep “real”, regarding how you prioritize the threats.

One of the reasons I’ve decided to teach a number of my courses from a Neighborhood Protection Team (NPT in A Failure Of Civility) standpoint is due to my belief that the approach to defending your community should be as a civilian member/defender of that community, not as a paramilitary squad rifleman (“tip of the spear” and all that). Mindset goes a long way in how you are viewed by those you protect. You want them to feel you are a competent, motivated peer, not a “Call of Duty” wannabe.

Communication, or the lack thereof, can make all the difference in your awareness of the developing situation, and how you can effectively deal with it during the event. Sparks31 does this kind of training in his “Grid Down Commo class”. (I’m hosting one the end of March) Having redundancy in all your planning is a prerequisite for success (no where more than commo), and falls under the “well thought out” part of the “2” header above.

Using the acronym PACE (Primary, Alternate, Contingency, Emergency), will help you prioritize your redundancy. For instance, using commo as an example Primary could be land line telephone or Skype, Alternate could be cell phone or a payphone (rare, I know), Contingency could be texting or social media (Facebook), and Emergency could be a Ham or CB radio,  or a “Dead Drop”. Plan redundancy into your preps, and even if you don’t need to resort to using them, you’ll have items available to help friends who might show up with nothing. An example of that would be this; You use an AR 15 as your “Go to” weapon. You have one other rifle of the same caliber, and magazine type (Keltec SU-16C fills a great lightweight, compact bugout/backup rifle niche), in case there’s a major problem with your primary, and you have a single shot NEF Handi Rifle in .223 as an extra. You can now arm two others with a rifle that uses the same ammo you have stockpiled for your rifle.

3) Are you physically and/or logistically equipped and able to carry out the planned responses to these threats. I know, I know, a number of us constantly harp on the whole “PT” thing. Guess what, If you don’t do PT, or haven’t figured out a way to mitigate your inability to do it, it will be a noisy version of suicide for you and probably yours. Defending and sustaining (day in and day out hard physical labor in a non permissive environment) your life is a physically demanding event. First choice for those who can’t physically stand toe to toe with the bad guys, would be to figure out how to keep the “wolves” from knowing you exist (by being very well concealed, or having the ability to move out within a very short period of time), or by keeping them at distance. If you can do this, you might have a chance even if you’re not up to a demanding physical challenge due to age or an infirmity.

There are ways around the “Leather shod mobility” (Rucking) requirements (we’re talking about this from a Survivalist “bugout” load perspective, not a “35 lb ruck and your load bearing gear” EIB/Infantry perspective). Although I plan on using “Shanks Mare under load” (and practice all the time), I have tested out other methods, so if the need is there, I can move even more supplies. Whether you have a plan to use ATV’s, horses, sleds, or game carts on a “Bugout”, you need to make sure it is logistically realistic (where will you get fuel for the ATV’s or horses, cache maybe?), and you are capable of the minimum performance standards needed to complete the task (can you even load and pull a sled, or game cart with your gear?).

Large ruck (Tactical Tailor Malice2) attached to a collapsible game cart from Cabela’s. There is still enough room and carrying capacity to put some other gear on it, and still be able to move effectively. 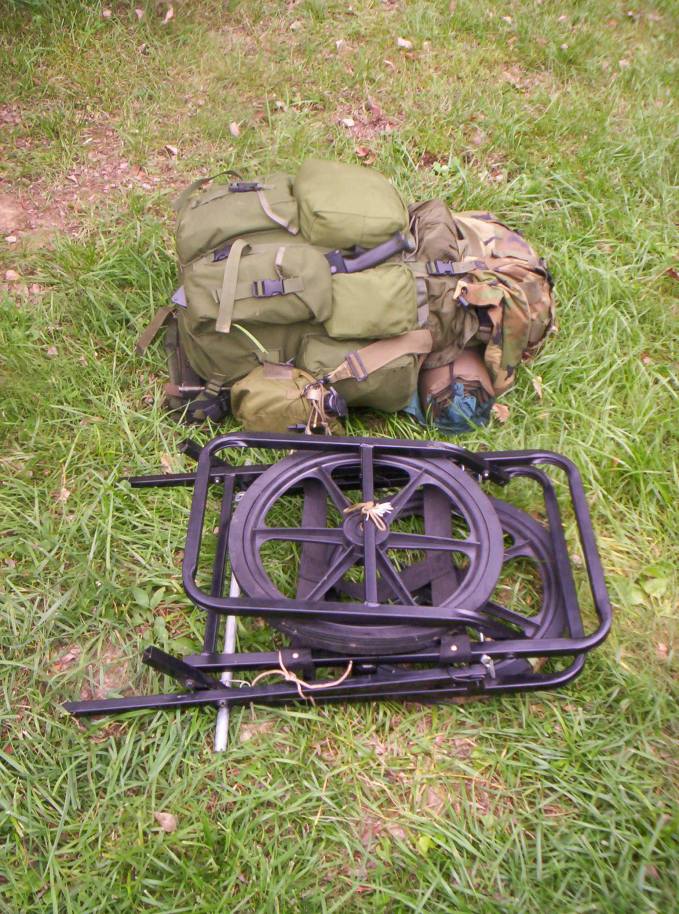 This is not an “If you can’t PT you ain’t shit and will die post!  I completely understand that there are plenty out there that have the desire and intestinal fortitude to compete in the TEOTWAWKISTAN OLYMPICS, but as a good friend likes to say, “Hell, I’m already a mobility kill.”. My desire is to make you look at this from the realistic perspective of the Survivalist, (not some mental masturbatory “I wanna live “Call Of Duty- The Later Years’.” exercise), and help you develop a plan that will actually work FOR YOU!. I will not just placate you with pleasantries such as “If you have this insert name rifle (God’s own laser don’tcha know) you will stave off the entitlement horde for days.”.

My friend Bergmann at http://evasion-survival.webs.com/ showing the use of the sled in deep snow.

There are plenty of self evident solutions out there, you just have to do your research, and more importantly, test them out, to make sure they work FOR YOU. Don’t get me wrong here. PT is very important, but you do what you can do (you know if your bullshitting yourself or not), and plan to fill the physical preparedness gaps you’ve found with common sense solutions that don’t rely too heavily on unreliable technological advances. Be honest with yourself on what you face, and how you’ll face it.

There are plenty of folks out there that will tell you that I have no problem spending hours on the phone giving suggestions to prep problems. I will not BS you with a “What you need is to attend this class I teach.” line. If I think it’s appropriate, and if you ask about them, I will tell you. I feel my responsibility is to help you figure out the best solution for you, and if that means recommending you take a course or buy gear from someone else, I will. The coming unpleasantness WILL discriminate! If you’ve planned, prepared, and trained ahead of time, your survival will not be just a “Dumb Luck” proposition, but a “Luck With Benefits” insurance policy.