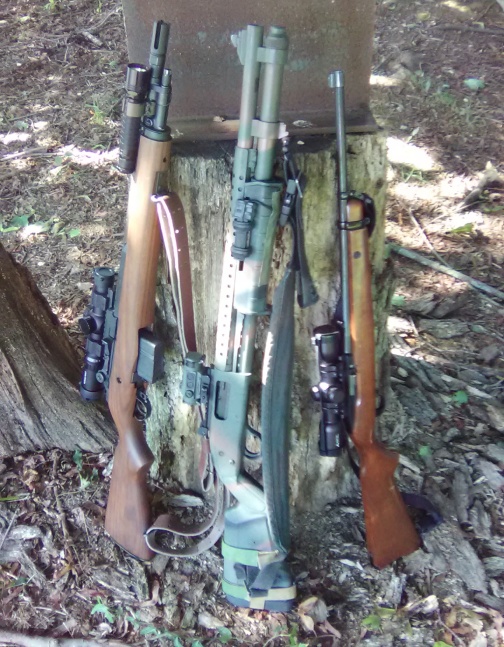 A semi-auto centerfire rifle (M1A Socom) left, large capacity, pump action shotgun (Mossberg 590A1) center, and a semi-auto rimfire rifle (Ruger 10/22) is about as versatile as one can get if you’re trying to cover both defensive and hunting needs with a small selection of long guns.

I started hunting when I was 7 years old. Like most, the first firearm I used to hunt with was a .22 Long Rifle chambered bolt gun. Many an “Adventure” I went on with that rifle. First thing I ever killed with it was a poor old mangy fox (did him a favor). Dad and I were sittin’ up in a tree the first day of deer season ( I was not deer hunting yet), and Dad said, “Hey, why don’t you shoot that fox when he goes by.”. I look up ( I was probably daydreamin, thinkin’ about being the sniper in my favorite picture from the Civil War) and see a fox out in a field runnin’ from right to left. I threw my rifle up, pulled the trigger and dropped him. 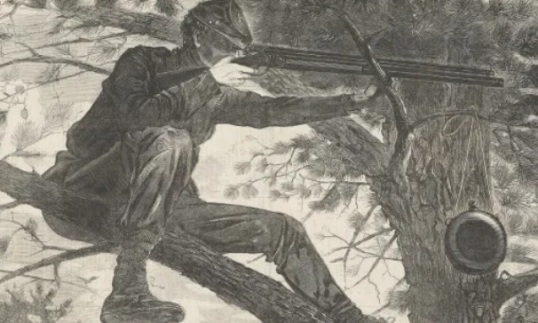 Yup, that was about what it looked like, I even had the canteen hanging on the branch.

Ended up being one of the best shots I’ve ever made. 70 yards, right through his temple and with peep sights no less. My Dad also gave me the family nickname, that I’ve had for decades, that day. In a worst case scenario, it’s hard to go wrong with a .22LR rifle if you can shoot it accurately. It will take game far larger than many think possible, if you can accurately place a bullet in the animal’s vitals. 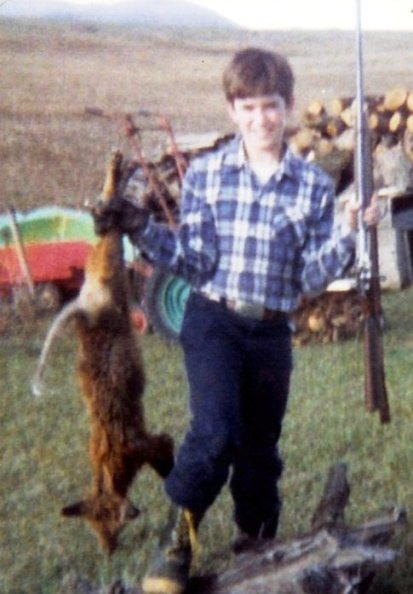 Many articles and videos have been done on what makes the best “One” firearms for survival. The first response should always be, “What are you trying to ‘Survive’?” I’ve already given my thoughts on long guns and handguns for defensive “Survival” needs, so now we’ll get into what I’ve found useful in the long gun category for foraging/hunting situations. 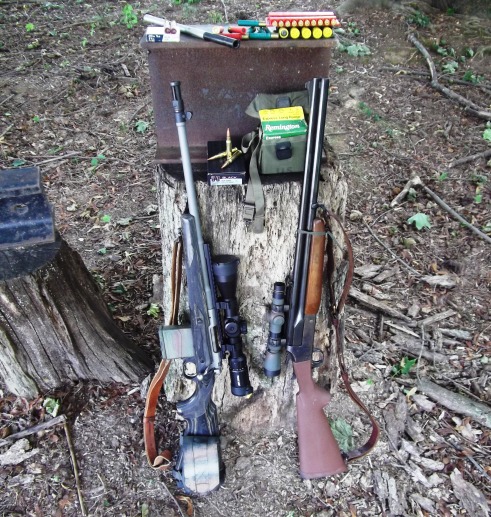 Throughout the last century, Savage/Stevens Arms made a number of combination guns ranging from .22LR over .410bore to 30-30Win over 12Ga., and in various barrel lengths. Many military pilot survival kits had one of these in it back in the 40’s and 50’s (started off being made by Stevens Arms). When I was 14, I bought my first rifle. I chose a Savage 24V Series D. This was the model with the .223 Remington upper barrel superimposed onto a 20 Gauge lower barrel.

“Most versatile rifle I’ve ever had.” is the first phrase to come to mind. “Best minimum chamberings to do most jobs.” is the second. The barrels are 24 inches long, with the .223Rem barrel having a 1-14 twist and the 20Ga is a Modified choke and patterns very well. I have killed pretty much every common game animal in my area with this firearm.

The .223Rem is a little light for deer, but will work if you know where to place the bullet (central nervous system shot). The .223Rem is also one of the most available and popular centerfire cartridges on the market today. The 20 gauge is a great hunting round, and only second to the 12 gauge in popularity. By the way, if you have a 20Ga, but want 12Ga performance, use the 3″ Magnum in it. Same payload in both the 2 3/4″ 12Ga and a 3″ 20Ga.

This long gun’s chamberings fill my “Mandatory Minimums” and “Readiily Available” requirements very well. After starting out with iron sights as a kid, I upgraded a year later with a Bushnell 3-9x scope. Not long ago, I downgraded the magnification to a Leupold 1-4x, because I wanted as low power as I could go for using the shotgun barrel.

Combo guns like this one and the one mentioned below are also good candidates for cartridge converters ( a future post), like my Savage “Four Tenner” .410bore adapter to fire .410 shotgun shells out of the 20Ga barrel. Unfortunately, they no longer make the Savage M24. If you find one on the used market, snatch it up. You won’t be disappointed in the versatility of this long gun. 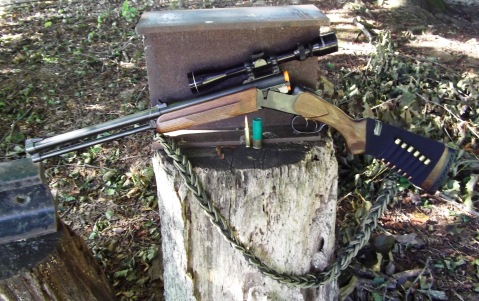 As you can tell from the above Savage 24 commentary, I’m a big fan of versatile firearms, and Combo Guns in particular. The Remington SPR-94 was their cleaned up version of a Russian Baikal copy of the Valmet 412. Valmet also made this firearms for Savage under the Model 2400 label.

My SPR-94 shoots 2 inches at 100 meters with the .308Win barrel. It has interchangeable chokes and patterns very well out to 40 yards. I like the hammer option better on my 24 than I do the double triggers on the SPR-94, but it works out fine, once you get used to them. The front sight post is the same as an AK post, in case you need to replace it. I’ve put about 300 rounds through the rifle, and approximately 500 rounds through the shotgun barrel. If I’m bear hunting, this has always been the rifle I carry. This is due to being able to choose from a 180gr Remington PSP .308Win bullet or a 3″ Brenneke 12Ga slug at a moments notice. I’m a bigger fan of the .223Rem/20Ga combination of cartridges for a survival gun than I am the .308Win/12Ga. combo. I believe the .223/20Ga is more versatile choice. 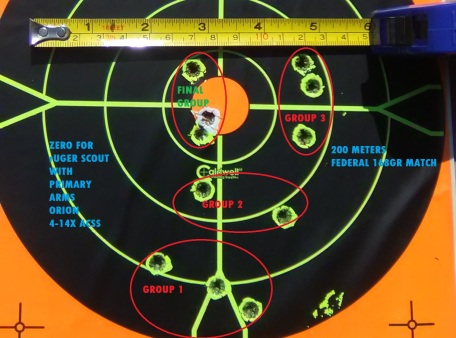 I’ve written a few posts that talked about many of the aspects of the Ruger Scout Rifle I use for large game hunting. It is a solid, “Mauser Style” action. With the 18.7″ barrel, the overall length is approximately 40 inches. Total weight with the PA 4-14x Orion optic and the XS Sights extended scout rail is 9 3/4lbs. (7.3lbs. with nothing extra). With good ammo and the PA optic, it will shoot into an inch at 200 meters. To get more of my impressions of this rifle, check out the other posts already written. 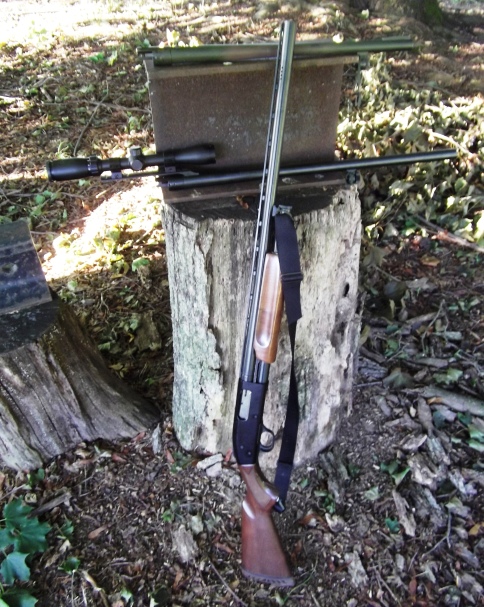 One of the most versatile long guns, especially for hunting, is the shotgun. I have used Mossberg shotguns for well over 30 years, and can say they are not only solid and reliable guns, but they are geared towards the budget conscious and the left handed crowds. As you can see above, the shotgun pictured can do not only the “Upland/small game” (28″ barrel) thing, it can double as a long range (200 meter) deer rifle, and a short, handy defensive weapon (18.5″ barrel).

The Mossberg M500 is always the first long gun I recommend to new shooters who want their firearm to be a “Jack of All Trades”. It is easy to shoot, available in all the popular gauges. It has many different barrel options, is basically ambidextrous and finally, is durable and reliable. Not much more needs to be said about the specs and options you look for in a firearm, whether for hunting or defense. 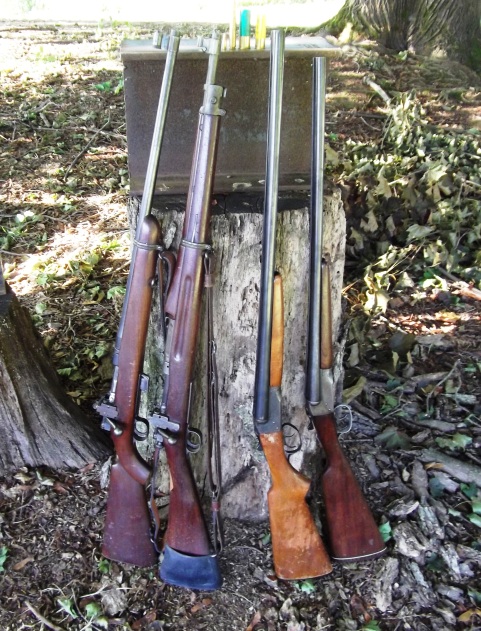 I’m a big fan of “Old School” firearms, and have been using them since I first started hunting. My advice on any long gun you get to hunt (not as a collector piece) with is this. Look at the track record of the firearm you are getting. The ones pictured above have been maintenance free (except for cleaning) for decades, and they’ve been use…..A LOT! 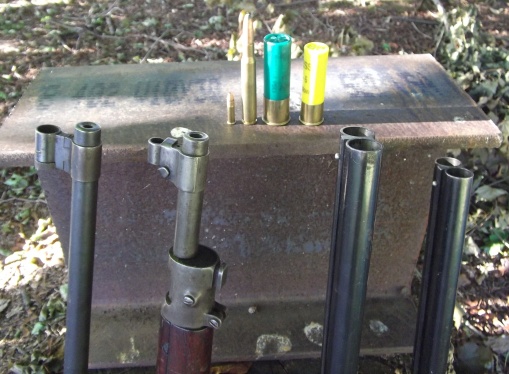 Another criteria to look at is the chambering. . 22LR is a no brainer for versatility and popularity. The .30-06Springfield and 30-30 Winchester are two more wildly popular and reliable game getters. Finally, 12 and 20 gauge shotguns are generally the “Go to” gauges when it comes to shotgun selection, and a good old double barrel or pump action will probably do everything you ask of it. The Stevens 311 20Ga. pictured above also has the versatility of having two of the Savage “Four Tenner” .410 bore inserts so it can be a “Starter” shotgun for a youngster or new shooter.

At the top of the post, you’ll see a pic with a Ruger 10/22 on the right side. I’ve had that 10/22 for well over 30 years and it’s never failed to fire and hit what I was shooting at. It’s had in excess of 8,000 rounds through it, and still keeps pluggin’ along. The most recent addition to it was a PA 6x ACSS optic, and like the rifle, it is simple, sturdy and versatile.

As has been said before, the .22LR cartridge is versatile and will get the job done, but, as Clint Eastwood said, “A man’s gotta know his limitations.”. Precise shots and knowing your holdovers are prerequisite for success with a .22LR firearm. Lightweight weapons and being able to carry a lot of ammo are the advantages the .22LR has in a survival scenario.

If you can carry a bigger caliber, and your survival hinges on literally, “Bringin’ home the bacon.”, use a bigger caliber. If you need light weight and are just going for small game, use the .22LR in a 10/22. You don’t need any more than that. 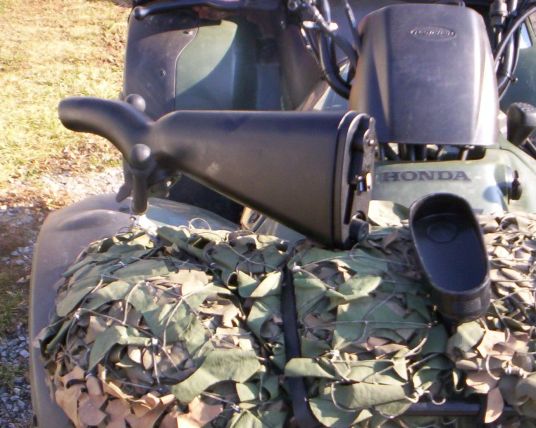 I started out with a Charter Arms AR-7 about 30 couple years ago. I bought a Henry Arms version of this rifle about 13 years back. While the Henry didn’t need any tweekin’ after I bought it, the Charter Arms version did. I had to ream out the chamber’s base a little to make the CA model feed reliably. Other than that, they’ve both been reliable and “Minute of Squirrel” accurate since I’ve owned them. 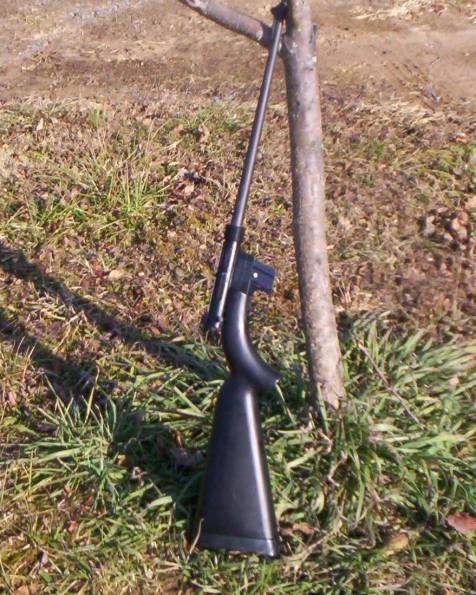 The AR-7 is very spartan as long guns go. It is a semi-auto .22LR takedown rifle that has a 2 aperture rear peep sight (you have a large and small aperture size to choose from), and a plastic (aluminum on the CA), drift adjustable, front sight. It comes with two 8 round mags (1 with the original Armalite and CA versions and apparently now 3 with the new Henry version which also has a built in scope rail). It weighs 3.5lbs. and collapses into a pretty small package. It does the job if you need a lightweight, compact semi-auto for a survival kit, but if you can take the length and weight, go with a 10/22.

That’s it for now, next up in the “Firearms For Freedom and Forage” series will be “Part 4-Hunting Handguns”.