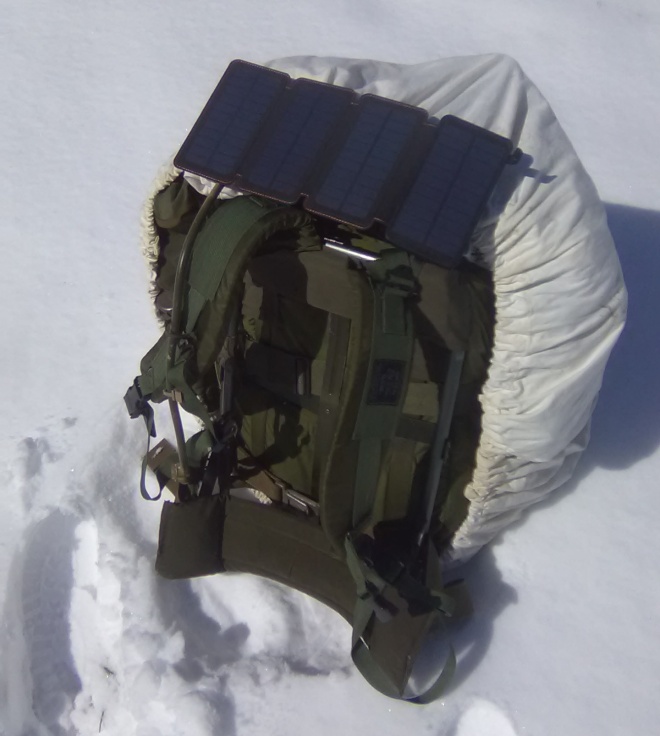 Charging the large fold up solar unit on top of my pack in the field.

Since the 90’s, I’ve carried a small solar charger for AA batteries in my kit. This was for keeping certain devices I had, like flashlights and PVS-7 NOD’s, operating in the field when there was no chance to get new batteries or charge the rechargeables I had on household 110 system. I started using CR123 batteries in the early 2000’s when I bought an IR laser that used a single 123 battery, and shortly after, I upgraded my weapons light to a two celled, CR123 powered, Surefire.

The use of CR123 batteries put a gap in my preps because, at that time, no one was selling 123 rechargeables. Oh well, guess when they’re done, the IR laser and Surefire is done, right? I made sure I bought a lot of CR123’s for storage. Back in 2013 I found CR123 rechargeables that were made by a company called Tenergy, and I’ve been using them ever since. The caveat to using Tenergy 123’s is that their charge is a little higher than a normal CR123’s 3.2 Volts and two together will burn out a standard Surefire bulb immediately upon hitting the switch (ask me how I know…). No problem, I also ordered some programmable bulbs for my lights and I was back in business.

Last year I decided to get with the times and see if I could come up with alternative charging means to recharge not only my AA’s and CR123’s, but also my 9 Volt batteries for my laser range finder and heat (game) detector. My FLIR 24 which has an internal battery and recharges via micro USB also needed a way to get a boost in the field. 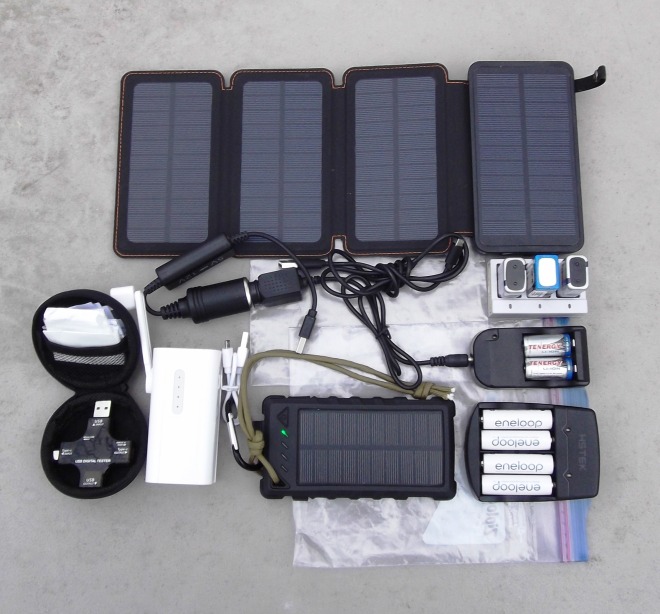 The total kit that was tested. Total weight was 3.25 lbs.

The system I’ve put together has been in use for approximately 6 months or so. Certain Items like the Tenergy 123 battery box I bought back in 2013 is no longer available, but I’ve found a worthy replacement. I have used a couple different companies’ products, and for the most part, they are about equal in quality and capability.

For the AA batteries, I usually use Eneloop AA’s along with their battery box ($27). I have also used AA battery HSTEK products ($25) with no issues. For the CR123 batteries I’ve been using Tenergy products, but as I already mentioned, that product is no longer available, so I bought batteries and charger box from Power 2000 ($20) and it has performed well. As to the 9 Volt system, I’ve had pretty good luck with the Keenstone charger and 9 Volt batteries ( $25)

Because the CR123 charger from Tenergy and Power 2000 both come with a 12 Volt and 110AC plugs, I bought a 5 Volt to 12 Volt converter ($10) for the 12V plug. I did this instead of finding a dedicated USB CR123 charger because I figured there might be a need for the ability to charge a dedicated 12V item besides that of my CR123 batteries (example, my “tablet”).

Now, on to the power sources. Although my old units were all solar powered, I decided I’d check into more than just sun charged devices. I found a small, hand held unit that was crank powered and figured it might be a good option if there was no sun available. The other two units I found were both solar. One was small and similar in size to an android phone and had one solar panel. The other one was larger, heavier, and it had four fold out panels. 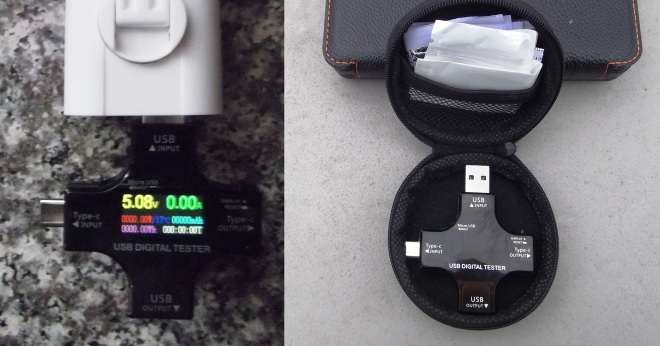 Digital multi-meter used for the tests.

To test the chargers I bought a small, digital multi-meter ($18). The process went like this. First, I fully charged the charger/power source being tested before connecting the multi-meter and discharging a specific number of mAh from the charger/power source. Next, I either cranked the crank charger for a given amount of time, or put the solar chargers in the sun (varied levels of sunlight that I documented) for a given amount of time. Lastly, after the time allotted, I then hooked up the multi-meter again and measured the number of mAh it took to completely recharge it while attached to house current.

As an example, the large solar charger shown below was fully charged up, then a measured discharge of 400mAh was completed. At that time, I put the charger out in the sun for 2 hours. Once the time was up, I then recharged the large solar charger from house current while measuring the required amount of mAh required to fully recharge the internal battery.

The small solar unit weighs in at 8 oz. and measures 5.5″x 3″x 6.7″ and cost me $25. it has two “Out” ports, and one “In” charging port. It has a small programmable flashlight built in and the internal battery holds 8,000mAh of power. In perspective, when I have recharged a pair of “dead” AA batteries they’ve taken approximately 1800 mAh to fully recharge. From testing using the small voltage meter shown, the solar panel recharges at a rate of 25 mAh an hour in partly sunny conditions. It’s not a lot, but considering it’s size, I wasn’t expecting much. 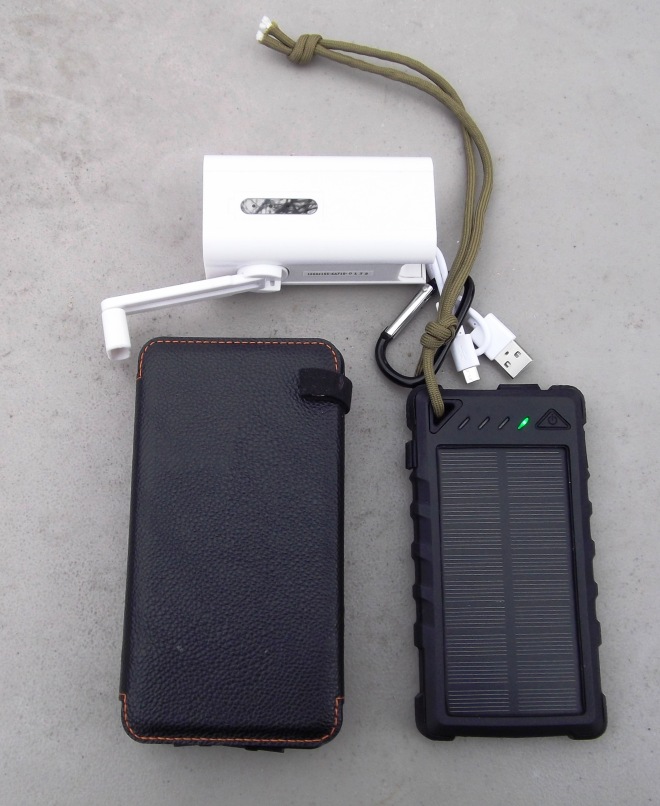 The large solar unit weighs in at 20 oz.  and measures 6.1″x 3.3″x 1.37″ in size and costs $38. It has two “Out” ports and one “In” charging port. It also has a built in flashlight, and the internal battery holds 25.000 mAh of power. I found that on a partly cloudy day this unit will recharge at a rate of 40 mAh an hour. It’s better than the small solar unit, but it’s not 4 times (4 panels) better. The advantage is it does recharge faster and it holds a lot of juice.

The final charging unit I tested was a small hand crank model. It weighs in at 8 oz., measures 3.75″ x 1.5″ x 2″ and costs about $30. It has one “Out” port and one “In” charging port. Like the other two, it has a built in flashlight. The internal battery hold 5,000 mAh of juice. 30 minutes of cranking will add 25 mAh of power to the internal battery. An hour of cranking this model will produce more power than either of the other chargers, and it doesn’t require the sun to do it.

To give you some comparative size, I can fit either the small hand crank charger or the small solar unit in a quart sized ziplock freezer bag, along with the battery boxes (and their batteries) for AA and 123 and the required cables. The large solar charger fits in a quart sized freezer bag with the 9 Volt battery box and and three 9 Volt batteries.

I usually carry either the crank charger (majority of the time) or the small solar charger with accessories (in the ziplock) in the buttpack of my load bearing equipment. Whichever one I’m not carrying in my LBE, I’m carrying in my ruck with the large solar charger and the 9 Volt battery box and batteries.

All told I have 38,000 mAh of juice to recharge whatever electronics I’m using, whether it’s a laser range finder (9V), my FLIR (USB), my PVS-7’s/ flashlights (AA’s) or the DBAL IR laser/ Surefire weapons lights (CR123’s).They can all be charged by chargers that can be replenished via the sun or a manual powered hand crank.

If you think, “Man, that’s a lot of expense or extra crap.” Fine, it’s a modular system, and you can pick and choose what makes the most sense for your needs and pocket book. Most of these items needing power are considered “Force Multipliers” to those who know how to use them. Give yourself the edge by not being reliant on a never ending need for fresh, disposable batteries in your gear.Anyone who has done combat operations will tell you that batteries was a huge logistics issue in the field. After it all goes to Hell, having this self reliant ability could make all the difference.

13 thoughts on “Making The “Lightning” For Your Force Multipliers”