As a Survivalist, your primary role is not as a combatant, but as a “Jack of All Survival Skills”. As I’ve said before, a Survivalist should be a jack of all trades, master of some (specifically the life saving and protection arts). A Survivalist needs to understand farming/gardening, animal husbandry, woodsmanship, mechanical repair (vehicle, farming implement, and firearm), and the technical/tactical skills of first aid (TCCC), extended wound care, coupled with the defensive tactics implementation of firearms, blades, and empty hands. 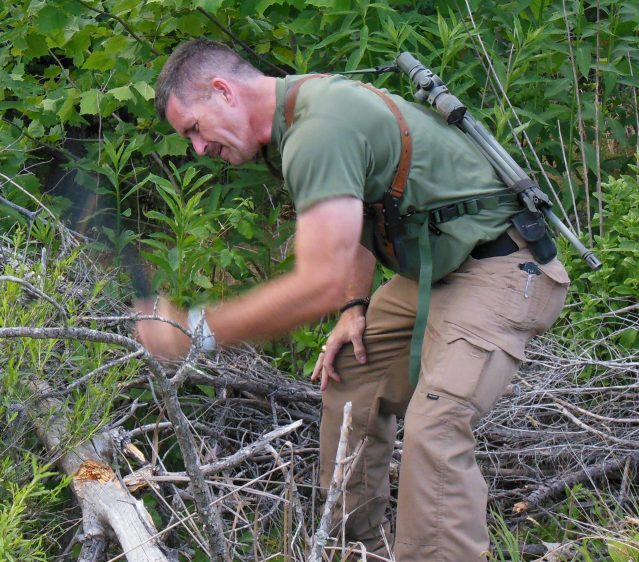 While this is an extreme type of activity while having a rifle slung on you back (most rifles will flop around on your back), the Keltec SU16C is light enough that it isn’t a problem.

Although a Survivalist should always be ready to fight after a SHTF scenario has taken place, that is generally not his primary task on a day to day basis. If there is a good possibility that a fight will happen, and it is possible to carry more than just a pistol, you carry a rifle, period! carrying a full size rifle all the time every day is extremely inconvenient if your primary tasks are not that of a grunt. While growing up on a farm, I can tell you that if you are carrying a full length rifle around (us kids didn’t have handguns, but during hunting season we always had a rifle handy), you are always looking for a place to stash it so that you can accomplish the task you are involved in.

Although a Grunt usually doesn’t have a dire need for a compact rifle unless he is operating out of a vehicle, the parameters of what a Survivalist needs and can use can be very different. A Survivalist uses the type of rifle we are talking about for defense of himself and those under his care. While the combat rifle is EVERYTHING to an Infantryman, the rifle is only one tool of many to the Survivalist.

Enter the Compact Fighting Rifle (CFR). Having a rifle that is reliable, durable, powerful, and compact is a tall order. There are a few out there, but they’re few and far between. I generally will only use a system that has been adopted by a military with high standards (this doesn’t apply to .22LR’s). I’m still waiting for the AR-10’s to be vetted and proven reliable to my satisfaction (still a lot of the feedback has been negative),  so I’ve never owned one.

A pic of a DSA SA58 (FAL) carbine I had back in 2002 during the ’94-’04 federal gun ban. No threaded barrel (integral brake) or folding stock was allowed, and this was about as compact as you could get with this type of rifle.

Others in the 7.62N (.308Win) category that I have owned and used are the M1A (M14), HK91 (G3), and FAL, and I can vouch that they’re all reliable weapons with good reputations. I’ve owned one HK91, seven FAL’s (of various configurations), and four M1A’s (of different configurations). In the assault rifle caliber category, the majority of what I’ve owned were AK’s or AR’s with a few Mini-14’s and one Daewoo K2 (A Fed Ban model). I have had a dozen AK’s of various configurations, and a half dozen AR’s (two Rifles and four carbines).

Although the M1A Socom in an EBR stock is somewhat compact, it’s loaded weight of 14 lbs. with an optic makes it somewhat cumbersome to be considered a “Compact Fighting Rifle”.

Of course we’d all love an SBR, but who wants to do that paperwork?

In the bullpup category (all the mil models are 5.56N), readily available, military tested rifles available to civilians, are generally the IWI Tavor TAR-21 and X-95, and the Steyr AUG A3. The TAR-21 is approximately 26 inches long and weighs in a 8 lbs.. The X-95 is almost exactly the same. The AUG A3 is almost 9 lbs. with its optic, and a little over 28 inches long. All the specs listed above are factory tech specs reflecting rifles with no accessories and no magazine.

Although the Keltec SU16C is a lightweight and capable rifle, I would relegate it to the “Truck Gun”, or “Get home Bag gun” and not give it the position of “Combat Rifle”. Empty, this rifle weighs right under six pounds with the optic and is 26.75 inches long. The only reason I still have this rifle is due to it’s super light weight and compact size.

So what is available for the Survivalist in the category of compact semi automatic rifles? We are going to look primarily at side folding stocked rifles, and Bullpups. I have never been a big fan of the Bullpup design, but I know some people that love ’em, and have nothing but good things to say. In the following paragraphs, we are going to look at what the practical weights are of different rifles when compared to the caliber of the rifles being covered.

Probably the most popular of the semi-compact fighting rifles. The M4 version of the AR is usually around 33 inches long (stock collapsed) and in this configuration weighs 10.5 lbs. 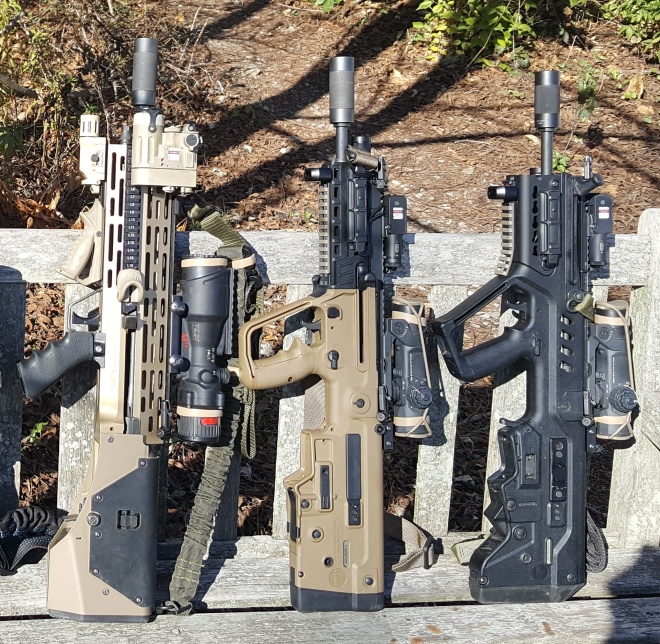 The rifle that is pictured to the left is an M1A Scout in a Rogue chassis. The overall length with muzzle brake is 30 inches, and with a 6x Trijicon optic, tac light and DBAL IR laser, this rifle weighs 16.3 lbs. (compact but very heavy). Both the Tavor bullpups and the M1A (not in the Rogue chassis) are considered to be combat tested systems, and although there are a number of other bullpups out there in the 5.56, the Tavors seem to be the most economical in the combat tested category. There really isn’t any combat tested .308 bullpups available out there that I’m aware of (the Keltec RFB is not combat tested), but as I’ve said, the M1A platform is a time tested system, and it has performed well in the Rogue chassis through a number of tactical rifle classes for the owner.

When this type of comparison is done, the calibers of the rifles in question are typically of the “Assault Rifle” variety. Although there are a number of compact rifles available in the usual 5.56×45 or 7.62×39, there are a few available in 7.62Nato (.308 Win). One such rifle is the DSA SA58 (FN FAL) Compact Tactical Para Carbine. 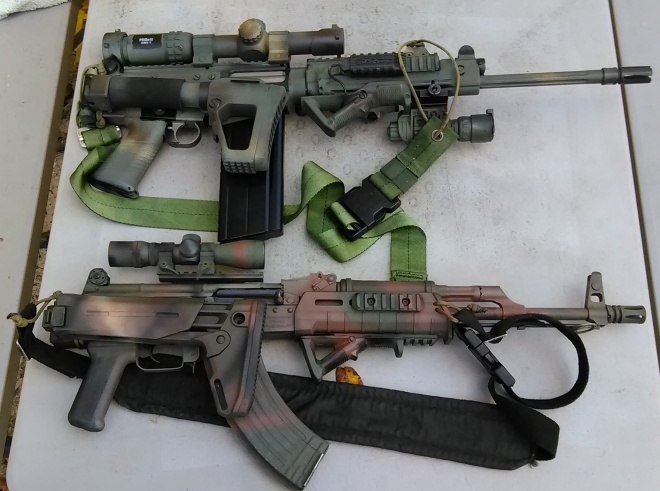 DSA SA58 (Para FAL) Compact Tactical Para Carbine with a 30 round mag at the top. AKM with Magpul Zhukov folder on the bottom.

Most will tell you that you can’t compare a battle rifle with an assault rifle in size or magazine capacity. Below are some picks of the FAL in comparison to a AKM with a Magpul Zhukov folding stock. The FAL weighs in at 11 lbs. with an optic, tac light, and DBAL laser (unloaded weight). It’s overall length is 37.75 inches, and the folded length is 29 inches.

In the compact defense rifle category, it’s hard to beat the FAL Para or a folding stocked AKM.

In comparison, the AKM that is pictured weighs 10.5 lbs. without any accessories, is 36.5 inches long, and 28.25 inches folded. Here’s an interesting comparison. With a 30 round magazine the AKM weighs 11.75 lbs. and the FAL weighs 12.85 lbs. with 30 round mag. Normally, battle rifles use 20 round magazines, since they are the most convenient. Since people like to make the apples and oranges comparison with these two rifle types, I figure I’d show that the size disparity isn’t as great as some would have you believe.

The AKM pictured on top of the SA58 showing the size is almost exactly the same, but the 7.62N cartridge far exceeds the performance of the 7.62x39S. 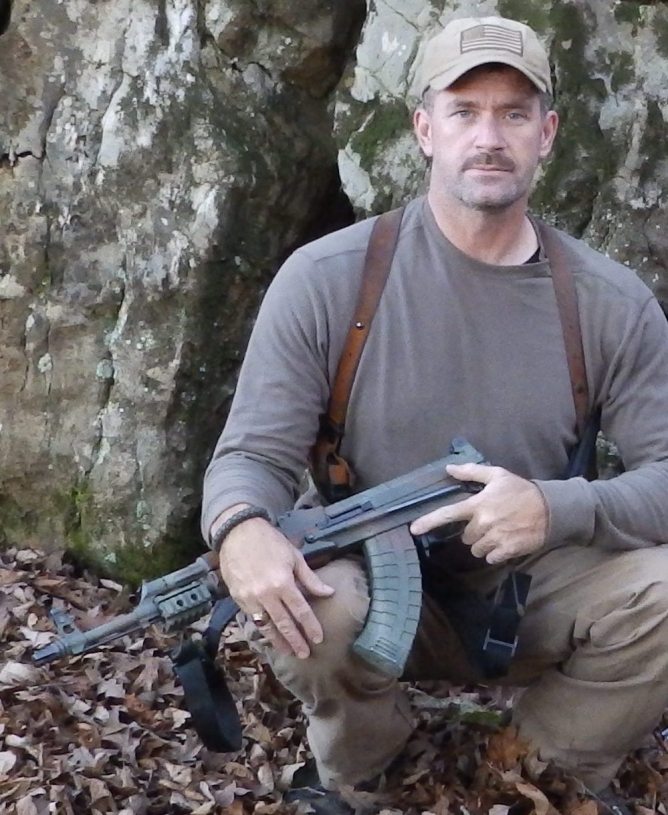 In contrast to the AKM with side folder shown above, this AKMS is a lot harder to put optics on.

If you are looking for a super compact defense rifle, it’s hard to go wrong with one of the bullpups we talked about earlier, an AKM folder or FAL Para. There are a number of good rifles available to civilians these days, and the most important thing to keep in mind is that when you make your selection and purchase your rifle, TRAIN WITH IT! It makes no sense to have something for that purpose, but to not train and become proficient in it’s use.

This post is about being realistic. Be realistic in what you think you will be doing during a SHTF situation. If you think you will be running from firefight to firefight, like your Modern Warfare 3 video game, you need to read some of Selco, or FerFal’s stuff. Be realistic in the rifle you select as your “Go to gun”. A compact rifle for a Survivalist beats the Hell out of a typical full size Infantry long gun for all but a few limited uses. Being practical, being realistic, and being ready is what it’s all about. Just like most people won’t carry their handgun if it is too large or uncomfortable for them to conceal, so to, the compact rifle will be carried more in a SHTF situation while doing the chores if it’s not a pain in the ass to transport.

34 thoughts on “Compact Defensive Rifles For The Survivalist”