Barry lays out a key part in the basics of the defense in a group setting.  SFC Steven M Barry (USA RET) bona fides include: served twenty-four years in the US Army (1973 – 1997), USMA 1973 – 1976 then US Army Special Forces 1976 – 1997. Barry served in 5th SFGA (11BS, 31VS and sniper), USAJFKSWCS (Unconventional Warfare instructor and sniper instructor), and 3SFGA (18F and 18Z). Barry has advanced training beyond military schools in Special Operations and was an instructor at United States Army Institute of Military Assistance and Special Warfare Center in Unconventional Warfare (these days called “terrorism”). Barry has UW experience in Asia, Africa and the Caribbean. Barry’s military schooling includes infantry, heavy weapons, communications, sniping, engineering, operations and intelligence, and counterintelligence.

During a recent correspondence with Tom Baugh about his AAR following Hurricane Matthew this writer commented that his OPs should have had check points behind them to prevent the perimeter being “crashed.” Baugh responded that he had been split between describing his deployments being LPs or OPs. Returning his letter I commented that we often combined the two functions (i.e, LP/OP) and mentioned that I had written a rather long paragraph describing how we really used them but that I had deleted that paragraph before sending because of the unlikelihood of civilians protecting their holdings from looters or bandit gangs having the manpower to do it properly.

Baugh asked if I would reproduce that paragraph here. What follows is a (somewhat expanded) reconstruction of the purely military paragraph on LP and OP. Then I will take the principles from the military paragraphs and explain how they are translated into civilian use by Neighborhood Protection Teams.

How We Used OPs and LPs (not necessarily according to doctrine)

The smallest tactical unit that can provide all ’round defense for itself (this includes OPs and LPs) is a rifle company. A rifle platoon cannot provide all ’round defense for itself and maintain security. By itself the best a platoon can do is push out a Listening Post or two; the platoon in all ’round defense is itself the Observation Post. It’s a different thing when the platoon in defense is part of a rifle company in defense. A rifle company in defense normally occupies a front of 1000 meters. A platoon in defense normally covers a front of about 300 meters with two squads “up” and one squad “back.” Each squad occupies a front of about 100 meters. We will assume squads of nine men. In a platoon defense, given its frontage, there will be a main avenue of approach the enemy will attack along. (Figure 1.) 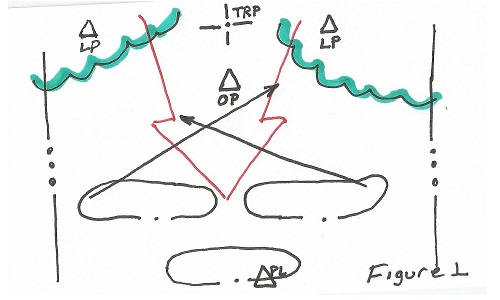 Given observation and fields of fire a single OP is sufficient. From the OP are sent out one or two LPs. The OP is positioned so it can observe the main avenue of approach. The LPs are positioned in terrain that provides concealed approach to the enemy. The OP must be within covering fires of the main line, the LPs line of withdrawal must be covered by the OP. The OP and LPs are drawn from the “back” squad. We invariably used a four man OP and two, two men LPs. The Squad Leader from the “back” squad stayed with the Platoon headquarters so when the OP and LPs had to withdraw he would be at the place of passage lines to ID his men.

Here’s how it worked. One of the LPs would detect movement (a rifle company in movement to contact cannot “sneak”) The LP alerts the OP – which alerts the Platoon Leader — then both LPs withdraw to the OP. The OP is now an eight man fighting position. The OP opens up fire with everything it has in the direction of enemy movement. That forces the enemy to deploy. That’s the important part. It takes much longer than people can imagine for PLs – let alone Company Commanders – to get their units back under control and deployed into battle formation after they’ve come under fire. Meanwhile the OP has withdrawn and is conducting passage of lines to reoccupy the “back” or reserve position. (In a protracted defense OP duty rotates among squads.)

How Do Civilians Do That?

Basically, they don’t. It is highly unlikely any Neighborhood Protection Team is going to exceed much more than six to eight people (Hopefully all men and hopefully all in the same neighborhood). Nevertheless, the basic principles outlined above still apply. LP raises the alarm, OP forces deployment and disruption, defensive line fights the battle.

Let us assume an NPT of six men. Obviously they cannot cover the LPs, the OPs, or the defensive positions. What to do? Here is where friendships and diplomacy come into play. You have to convince Aunt Martha and Uncle Joe and Cousin Bess that it is in their own best interest to “road watch” for you and report the movement of looters or bandits toward your neighborhood. They are your LPs. They raise the alarm. Each OP is manned by two men. The last two men man the Command Post. Positions 1, 2, and 3 have already been prepared for defense. It is unlikely that gangs of looters or bandit gangs will have the sophistication to use converging avenues of approach, so all you need to know is what direction they are coming from.

Here is how it works. Aunt Martha reports to OP1 that several pick ups of armed men just passed her house. OP1 Alerts CP; CP alerts OP2. Both CP and OP2 move to defensive position 2. At the appearance of the lead pick up OP1 gives them everything they have, then withdraws to defensive position 2. Meanwhile the looters/bandits are disrupted and trying to deploy and probably wasting ammo.

From that point on you may or may not have a battle.

1) Tom Baugh tells me that USMC doctrine from his time (ed. late 80s/early 90s, as taught at Quantico) often conflated OP with LP (i.e. an LP/OP). Current Army doctrine does the same. In Special Forces we did that out of necessity (and only on the back trail). If a rifle company is doing it it is out of stupidity.

2) None of the above has anything to do with the legal niceties of a non SHTF scenario.

One thought on “The Basics: LP’s, Op’s And The NPT”