Brushbeater gives more points to consider in equipment selection.  They perfectly dovetail with points I made in the post here. 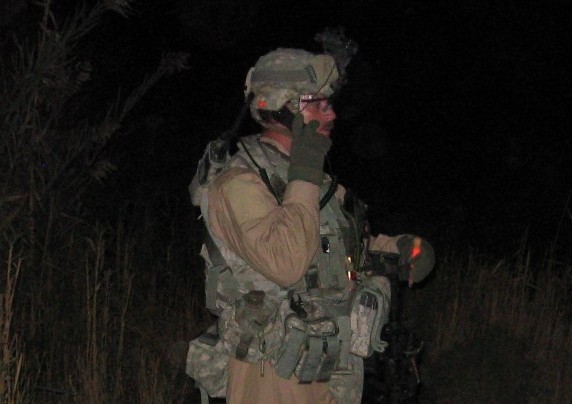 Without good commo, your fate could be a question mark.

As with firearms, all too often Survivalists/Militia folks have a hard time separating what they need from what they want, or try to cover way too many bases, resulting in cutting off the nose in spite of the face. Communications are no different. Do you think the guy in the picture is effective with all this? (I know it’s meant to be a joke, but we all know THAT guy.)

For those who’ve been in the game a while, a few questions always seem to come up among new folks, along with the most common answer:

I get it. We’re all human, this stuff can get expensive in a hurry, and like most of y’all reading there’s little disposable income every month. After all, time is short, and getting shorter, and there’s more to building a resilient (or as resilient as possible) infrastructure than just communications.

Lone wolves die; they’ve been cast from the fold for a variety of reasons- they’re old, sick, or challenged authority and lost. As pack hunters, and humans are as well, the loner cannot last long. If you’ve not at least on some level networked with other like-minded folk, you’re woefully behind, Shirley. Each person brings a skill to the table, and the more versatile the skillset, the better. This does not however mean anyone is specialized, because after all we know that’s for insects. As the signal guy, or at least learning to be the signal guy, the first mission is recognizing what the individual requirements are and build your way up to regional and further. Once done, get your folks together at your meetings/training sessions/beerfests and go over what those are. Communications needs are different for just the group of Survivalists trying to make it through unpleasant times versus the Militia group planning to work in the Light Infantry paradigm. A resilient community must be established before anyone thinks about writing a Patrol OPORD. That being said, in this sequence:

It’s logical to first address why you’re justifying the expense of the equipment before you jump in with both feet, especially if you’re on a budget like most of us. But understand that cheap gear usually always gets expensive down the road, so buying a name brand for something you’re depending upon is pretty important. Taking a shortcut and settling for license-free solutions is also a bad idea- it limits options and teaches nothing. (it’s license free, after all…so just think about why that might be.) In following the aforementioned steps, you and your group will greater be able to recognize your needs and begin to build a procurement list from that. Signal is but one part of the equation, albeit a critical one, and most of the same principles can be applied to almost all of your other equipment.

4 thoughts on “More On Equipment Criteria And Selection From Brushbeater”