As Matt Bracken pointed out the other day in his interview, and a position I completely concur with, is that we won’t have a mass upheaval and the lights stay on. It’s just not happening. Our grid is the most fragile part of our infrastructure, aside from our just-in-time supply system. And since everything is so interconnected and interdependent, just one plant going down due to workers not being able to get there could cause a serious ripple that may take a long time to fix(if ever). This is not even factoring in safety issues.

But let’s take a step back. So the power doesn’t go off where you live. There’s little risk of social shock in your location (unlikely) and you don’t experience weather disruptions every winter or summer(also very unlikely). Your power is supplemented from somewhere. And that somewhere is indeed likely to experience significant disruptions should the US’ creditors say “no more debt Sam…” or better yet, the election yields marxists running amok.

Or maybe, none of that happens but you end up having the hundred year blizzard and the lights go out for an extended period of time. What are you going to do then? Simply huddle up and pray? Every year on the east coast we risk hurricanes, the midwest  and deep south has tornadoes, and the west coast the menace of earthquakes. Over dependence on the grid is a foolish and bad thing.

Each of these are likely scenarios; you’re absolutely blind if you don’t see it, and haven’t lived long enough if you haven’t experienced at least one extended power outage. A look at Venezuela is a snapshot of days to come, and anyone who lived outside the wire in Iraq or Afghanistan knows full well the power rationing that goes on there. Those folks live just fine, and so can you. When Hurricanes Fran and later Floyd hit the NC coast, we lost power inland all the way to Winston Salem, and for my area in the central part of the state, it stayed off for over a week and a half. We still had light, and we cooked on our charcoal grill.

This stuff used to not be as big of a deal as it is today. This is where a lot of folks will point to generators or solar, which are great options but expensive and labor intensive. If you don’t have the money to get into that, having oil lamps for light are an excellent supplement to any Survivalist’s plan. 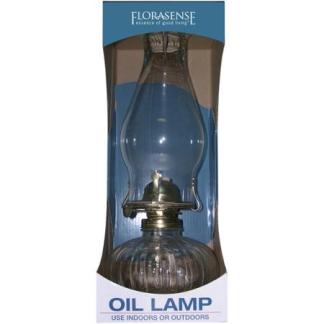 Oil lamps are relatively cheap, can be found anywhere, and like the other tools from my last couple posts, are generally idiot-proof providing generations of use with a bit of care and common sense.

A Survivalist should have at least one for each room, if not more, and plenty of spare wicks and lamp oil. generally they put out much more light than candles, are fairly efficient on fuel, and are relatively safe to use. While they put out less candle power than Coleman camping lanterns, they’re easily refillable and much simpler in use.

There’s two types commonly encountered. The basic indoor type, like the one pictured left, which work well pretty much anywhere indoors but do not handle breezes or wind.

The second type, pictured right, is often called a Hurricane Lantern, and as the name implies work very well outdoors but also are perfectly fine to use inside.

If you have kids or clumsy people in your fold, and everyone does, you may want to consider a few wall mounted lamps, which not only are functional but add a good amount of character to a house.

A frequently overlooked issue with oil lamps is the storage of fuel. Lamp oil is simply refined kerosene. In fact, K-1 will work just fine in your lamp but it will emit odors. For homes built since the 1950s, low ceilings might make this an issue. Do not use any other kind of fuel in these, especially not gasoline or camp fuel. You will have a fire. A second and much more serious problem with lamp fuel is the actual storage. Often lamp oil is sold in thin plastic bottles, folks buy it, and set it in a corner for long periods of time. The problem is that the plastic gets brittle form the oil itself and can crack, spilling your fuel and creating a serious fire hazard. Get a kerosene rated container, which are most often blue in color, and store the fuel in bulk in that.

With several extra fuses and a few gallons of fuel (or more) stashed away, you’ll have an alternative light source which will last a very long time when the lights finally do go out. If you start thinking of ways to live without the grid as Michael Landon demonstrates up top, the impact of losing modernity are going to be far lessened. If you can be the guy who shrugs when the power goes off and simply charlie mikes (continues movement) on with his life, then the problems of the world will be no big cause for panic.

Do yourself a favor and pick up a few. They’ll be worth their weight one day.

After the fact “Halfassing” can cause needless accidents. Get it now, Learn it right, Live it well. By the way, here’s a good post from Selco about the importance of illumination.

4 thoughts on “One Type Of Survivalist Illumination”