Back in March, I wrote a post on the Combat Smock. The purpose of that article was to point out not only the specific advantages of that particular garment, but also to make light of the fact that picking the right gear and clothing can make a huge difference, not only in your ability to survive, but the level of comfort you enjoy while surviving. A little while back, someone asked me if I had a recommendation for tactical pants. This post is a “fleshing out” of my answer.  I have been using and selling the Tru Spec 24-7 Tactical Pants since June of 2011, and can say without a doubt that, for the money, you will not find a better pair of pants for a survival/tactical environment scenario, let alone, as your everyday “go to” apparel. 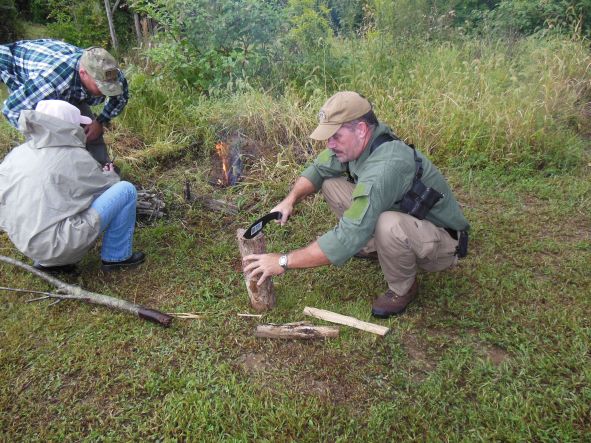 Althought these pants are plenty roomy, they are not overkill like most BDU’s are.

First, I’ll start off with the fabric.. 65/35 Nylon/Cotton is one of the best hard use fabrics I’ve seen on the market today. It blends the durability and quick drying features of nylon, with the comfort (read that as a lack of a plastic, rub you raw feeling) of cotton. I’ve had the cotton canvas and 65/35 in 5/11 pants (it’s what I used to use), and I’ll take the 65/35 every time. The cotton canvas gets wet and STAYS WET, and in a cold weather survival situation, it will kill you! The cotton canvas also rubs you raw, and it feels hotter in warm weather, and chaffing is “no bueno” if it can be avoided, si? The only thing I’d buy in cotton, when it comes to survival/tactical clothing, would be summer weight BDU’s, and I even get those (BDU’s) in 65/35 these days, simply because they last longer (summer weights always wore out too quickly). 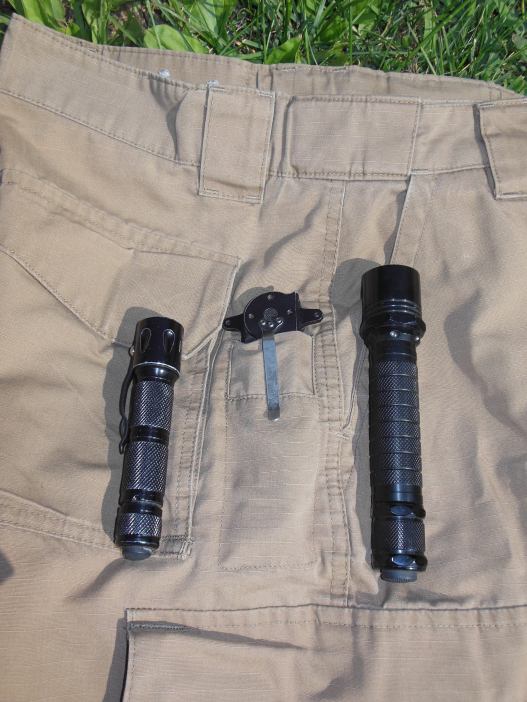 Knife/light pocket will comfortably hold a tree cell Surefire, a CRKT M16-14SF (3.94″ blade) or a Surefire E2 with pocket clip (I like the security of the clip, but the 3 cell usually stays put without a problem. 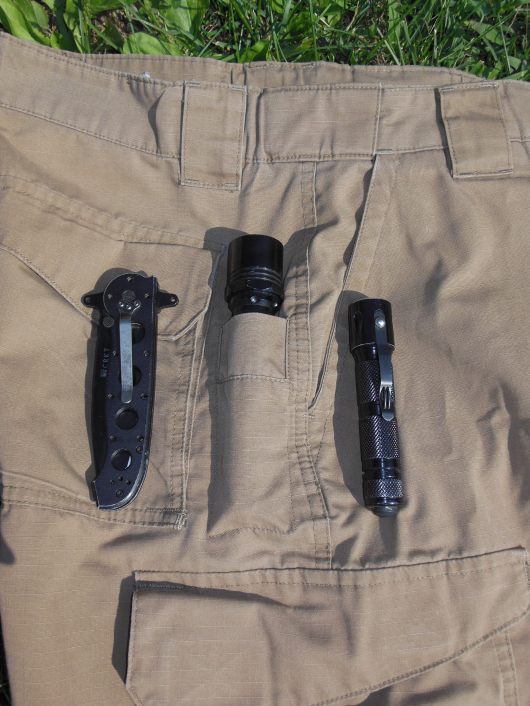 Next we’ll go to the features. As with the Combat Smock, the 24-7 pants have a number of well thought out, AMBIDEXTROUS pockets. If you’ll note, I put ambidextrous in caps. Why is that? Well, I’ll a lefty, and something I can’t stand, is a company that doesn’t take 10% of the population into account when designing gear or clothing. I’m not saying make your items specifically for left handers, but by God if it’s something that can be made ambidextrous, make it AMBIDEXTROUS! Tru Spec does this with the 24-7 pants. They have a total of ten pockets. Two slash front pockets each in its normal position on each side . Two flap covered back pockets in the normal positions left and right.. Two slash knife/light pockets between the front and rear pockets, one on each side. One flap covered cargo pocket on the outside of the thigh on each leg. One small flap covered pocket on the outside of each cargo pocket. The knife/light pocket is awesome, and greatly reduce the wear on the front pocket edges, and your hand, when you try to reach into that pocket to retrieve anything. The Cargo pockets also have more than normal merit, as they have two open top pockets/dividers with them that are sized to fit an AR mag apiece. The cargo pockets, while not as big as a BDU cargo pocket, is still bigger than a lot of the “In vogue” cargo pants that I’ve seen in the last few years. Other features include a non pleated waistband (hate pleats), that has a self actuating elastic strip for adjusting to approximately a 4 inch variance in size. The belt loops are wide and sturdy, and the snap closure, and zipper are well made and durable. All pockets that have flaps are secured with velcro closures. To round out the features, Tru Spec has put a vertical slot inside the pants leg on the edge of the knee reinforcement patch, so you can put an ACU type knee pad in the knees of these pants, if you desire. 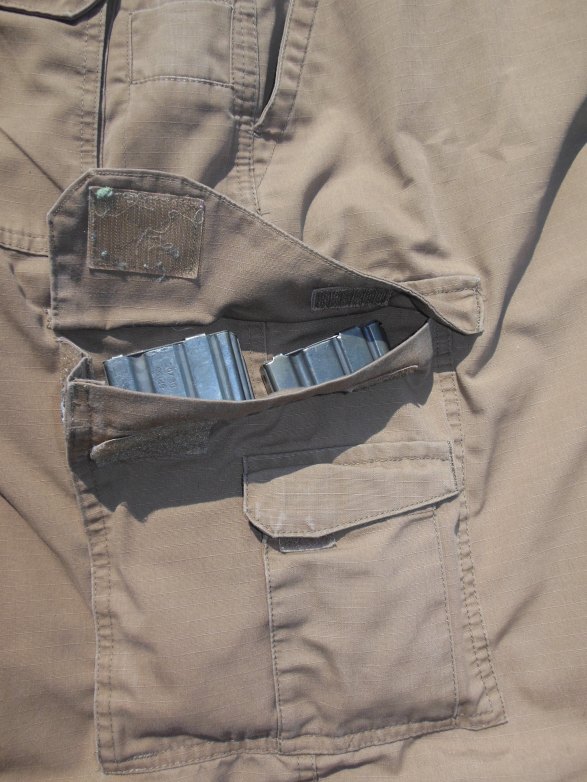 Two AR 15 mags in one of the cargo pockets. Note: the pocket has a velcro stay at the top rear on the bellow section, to keep it flat when there is nothing in the pocket (no saggy cargo pocket).

Keltec P3AT with extra mag in a Desantis Nemesis cargo pocket holster. It stays put, and doesn’t flop over.

To give you an idea of their durability, I know of an individual who has worn the same pair of pants everyday, 5 days a week for the last year. obviously multiple washing’s every week are the standard (uniform), and as you can see in the picture (black pair) they are none the worse for wear. Fading is minimal, and the only problems have been with the thread on the outside edge strong-side, rear pocket velcro, and the  same side rear velcro on the cargo pocket starting to unravel. These were easily mended with a needle and thread, but they were areas with durability issues (full disclosure you know). In my off time, and when I teach wilderness survival courses, these pants are all I wear (I hate jeans), and I have never had a problem with any of them in the three years I’ve been using them.

My conclusion has been that except for a pre-planned combatant role, (we’re gonna go conduct combat operations against bad guys), these are the pants I would use. If I’m conducting extended combat operations I would wear BDU’s because they have more spacious cargo pockets (no divider, but I use Specops cargo pocket organizers anyway), they have buttons (easily repaired in the field) instead of zippers, snaps, and velcro (not a fan field use),  they are available in camouflage (I use woodland) for the same price as solid colors (storing away for a rainy day), and I usually blouse my pants over my boots in the field (blousing ties). If need be you can put blousing ties in the cuff, but I don’t bother with that for regular everyday pants. The colors available for the Tru Spec 24-7 pants are Olive Drab, Coyote, khaki/stone, Dark Brown, Black, Charcoal, Dark Navy, and multicam (about 50% more in price). They sell for anywhere from 30-57 bucks, depending where you look,(on amazon they are $11 bucks cheaper than the comparable pants 5.11 sells). I hope this has been helpful, and yes, a lot of tacticool types call these “just shoot me pants” (guess those same dumbasses better stop wearing their high speed low drag “Operator” Oakleys huh?).. Tell me, would you rather wear jeans, and “fit in”, or actually spend money (probably cheaper than your jeans are) on something that has some  utility, blends in, and carries what you need it to carry, and  COMFORTABLY to boot?  Your choice.

P.S. Don’t forget a good rigger belt, If your belt sucks, and can’t hold up your pants and gear (holster, sheath, etc.) it’s kind of pointless, isn’t it?