When I first joined the military, we were all issued medium ALICE packs, and expected to get everything on that packing list, into that little pack (10 pounds into a 5 pound bag). We made it work, but my thought was “Damn, I wish I had my large ruck”. Of course asking your Drill Sgt why we didn’t have large ALICE packs elicited a response something along the lines of “PUSH!”. Fortunately, upon arrival at my first unit, that wasn’t a problem. I was promptly issued a Large ALICE ruck, and apparently expected to fill it…..all the way! The All purpose,Lightweight, Individual, Carrying, Equipment (ALICE) the military has used for years works well, no matter what the nay sayer/tacticool crowd says. I’ve used it for about 32 years now, and if your on a budget, it’s definitely the way to go for your tactical load bearing needs. One of the best items to come out of the ALICE system, is the Large rucksack. This pack has carried more gear than probably any other single pack type out there, and it continues to do so, even though there are other “better”, more modern packs available. Because I normally use a buttpack, using a longer/lower sitting pack like the internal frame CFP-90, or the newer molle/molleII/ILBE packs that are issued is impossible. I continue to use the Large ALICE, because it’s simple and it works. I won’t give up my ALICE ruck for anything but a the modified version by Tactical Tailor called the MALICE (Modified ALICE). We’ll talk about the benefits of the MALICE pack in another post, since this post is about ALICE pack mods, we’ll get to it.

It’s always a good idea to have a means to carry basic, mission specific or survival items, without having to carry the whole ruck. This could be as simple as “You just got ambushed and you’ve gotta leave the ruck to run for your life!”, or “You need to carry your NOD’s, Spotting scope, first aid gear, and a SAW ammo box”.  How are you gonna do it? I’ve carried an empty assault pack in the top of my ruck plenty of times, but depending on what I’m doin’ or prepping for, usually I just carry the assault pack from a CFP-90 (saw one for $36 in Ranger surplus yesterday). This helps in a number of ways. It will expand the space available for a medium ALICE ruck (camo pack shown). It also will make a convenient place to store the absolute survival/sensitive items you feel you need to take if you have to ditch your ruck. I use a medium ALICE with frame when I hunt, and the addition of the assault pack to the top increases my loadout space by another 30% if I need it. Adding it to the Large ALICE/MALICE helps keep the balance of the pack up, not back, like so many of the modern packs do with the clips for the assault pack being placed on the frontside, making “The ruck lean” even more pronounced. 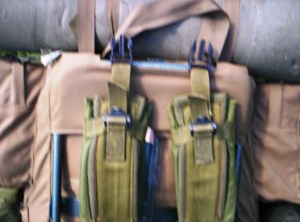 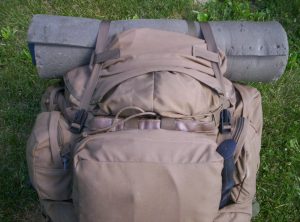 Once you’ve done that, it’s a simple matter of just snapping the assault pack in place (see pic).

When you are routing the top of the pack straps through the fastex buckle I’ve found it’s easiest to do it this way.

1. Run the strap tip through the slider.

2. Run the strap tip through the bottom slanted slot of the buckle.

3. Run the tip of the strap under the frame through the slot made for the shoulder strap and back around.

4. Route the strap back through the SAME SLOT (if it’s a two slot buckle) of the fastex buckle.

5. Run the strap through the slider (it keeps the buckle in one location, up high). 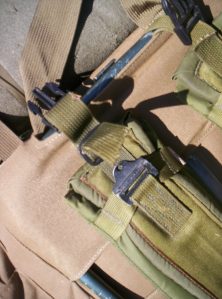 6. And finally, route it through the pack strap buckle. 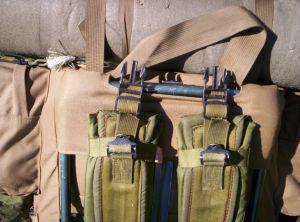 Your front compression straps should each have a male fastex buckle in this location.

That’s as simple as it is. This modification will clear up space within the pack’s main compartment, and make accessing or separating your ruck and assault pack very quick. If you’re on the run, time is something you don’t have enough of.

Next post will be about the Large ruck ALICE and MALICE, and the advantages of that design.

9 thoughts on “A Simple Alice Pack Mod- Medium and Large”

"This is only the beginning of the reckoning. This is only the first sip, the first foretaste of a bitter cup which will be proffered to us year by year unless by a supreme recovery of moral health and martial vigour, we arise again and take our stand for freedom as in the olden time.” - WSC

Knuckledraggin My Life Away

Information to Hone Your Edge Against Bad Things

The Order of the White Rose

Read. Learn. Train. Do More PT. Be a pilot-operate your own controls.

"once more unto the breach, dear friends..."