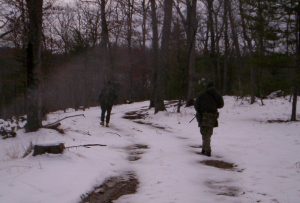 I’m writing this after a great weekend of training and an all around good time at Echo Valley Training Center. As stated in an earlier post on WRSA, http://westernrifleshooters.wordpress.com/2013/11/11/jc-dodge-sends/    RBTEC was developed to give civilians a Program Of Instruction that helps develop good habits in students when they are out conducting security patrols in their rural area of responsibility, post SHTF.  My students will tell you “I’m up, he sees me, I’m down!”, “Distance, Direction, Description”, “MAKE A DECISION!”, and “Move, Shoot, Communicate!” are phrases they probably got sick of hearing, but constant reinforcement is the only way to make it stick. I also strive to help the students 1) Understand the reality of patrolling operations, by giving them real world SHTF scenarios (not just the”Look Ma’, I’m a ‘G'” crap) that need to be responded to (man with a rifle, not threatening, just hiding in the tree line, walking across the road, etc.). This is not a shoot at anything that moves or has a weapon course! 2) Present students with a real thinking threat, that will maneuver on there position, forcing them to make decisions, for example; maintain 360 degree security (avoid tunnel vision) while engaged, break contact, attack, etc. On day 1, the morning consists of classroom instruction and practical individual and buddy team tasks practice (Individual Movement Techniques (IMT), and Buddy Team movement) , and a review of the TCCC MARCH protocols (I’m not a medic, so the review of MARCH is all that I do, along with” Treat yourself, Win the fight, Treat your buddy”.), and a review and hands on of Thermal and Passive Night Vision is conducted. In the afternoon I conduct patrols with and without ambushes (day and night) using blanks, and OPFOR using some full auto (legal class 3) weapons. AAR’s are performed after each ambush, and the lessons learned are applied to the next scenario. Day 2 consists of safety preps for the live fire, followed by a patrol (longest of the class) to the jungle lane. After arrival at the live fire site, safety instructions are again reviewed, and at that time dry fire runs on the jungle lane are performed. After the dry fire portion, each student will run the jungle lane individually using live rounds, and upon completion of that safety assessment of the student, the Buddy Team live fire will commence. Multiple assault and break contact drills are conducted, and it’s usually only limited by the amount of ammo the students bring with them. If any questions exist, concerning “why do you use trails?” etc. read the aforementioned WRSA post, as I explain it there.  Some AAR’s are listed below. 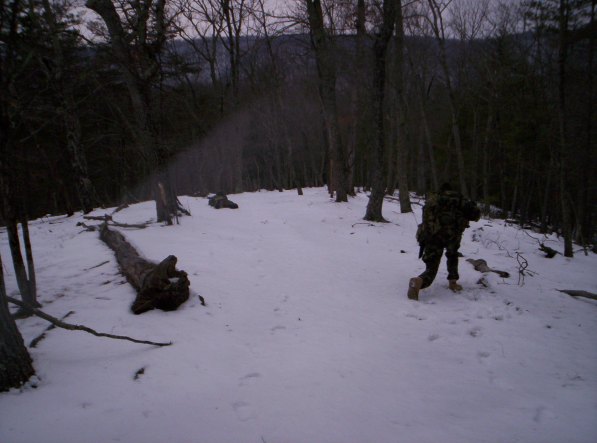 Arrival at the camp site was kind of tricky once we entered the property; ice-rutted road with various degrees of slope. Four-wheel drive vehicles were a must to traverse the road to the site that is about a half mile off the paved road.

Once parked, the vehicles were unloaded with the various gear and the most important: the furnace i. e. burn barrel (a 55 gal steel barrel I cut the top out of and had 2″ holes drilled along the bottom). As JC set up the canopy, Jeff and I sawed a felled tree into fuel and fired that baby up.

JC began the class room instruction using his handout and an Army infantry handbook (FM 7-8). We were instructed in the various methods and principles of patrolling. Formations and situational awareness using a two man buddy team up to squad strength patrol with common sense being a key element were introduced. Emphasis was given and illustrated on road/path crossings using different team strengths. Safety could not have been more emphasized in all aspects.

We then geared up and put into practice what we had been instructed in beforehand. Low and high crawling then bounding was practiced and I must say, the snow made it a whole lot easier on the knees and elbows whereby pads were not needed as they were when I took the class in November. Then we hit the trails and patrolled using the two buddy team patrol scenario; changing point man a few times as well as dropping, crawling and bounding, taking care to make sure the rifle barrel end did not jam with ice/snow.

We broke for lunch and proceeded to set up our tents and lay out our sleeping gear then readied for the ambush patrol. Blank rounds were loaded in our mags and off we went. The guys at EVTC are all to willing to set up the ambush scenario and are good at it.

As we walked as stealthy as possible on and off the trail, we knew what was coming but still the adrenaline rush upon contact and the element of surprise still happens no matter how many times you do it. The beauty of blank-round training and the live ambush element is that it is as realistic as you can get without getting into an actual fire fight. The boys at EVTC had set up a front and rear ambush whereby we had only focused on a frontal attack and had not performed the 360 degree awareness. Lesson learned. Also, blanks are not forgiving and tend to jam more so than live rounds so you get to deal with unjamming your weapon under duress. Those of us not mil trained and who have not been subjected to battle can somewhat better understand what can happen in that situation. The night patrol was,  as well, enlightening. Jeff took us off the trail and into the woods where we walked parallel to the trail knowing that there  “could” be an ambush ahead. Doing that had faked out our attackers to a degree and we were able to get past one sentry and into the lair. However, the dual position front/rear attack from our aggressors proved to overwhelm our two man team and break contact was initiated and ammo was gone. Hiding in the heavy brush and trees provided some concealment from the night vision, as reported by those who had it.

Day two came the live round exercise and overall, we did a great assault and break contact during the dry and live fire rounds. JC was always shouting “safety-muzzle-trigger” as we were running the exercise.

For the most part, my experiences taking this class gave me the realization of what my capabilities are physically and mentally. As this was my second RBTEC class with JC, I knew what to expect and had prepared. I thought that I had performed better this time as well. Knowledge and practice is what makes you ready for anything in this life. A couple of  things I came away with this weekend is to watch your six, the elements can change your tactics, try your gear in actual settings, stay or get fit, and live round ammo does not produce a muzzle flash.

For the prepper or militia types out there, this kind of training is necessary. If you have not had any of this type of training, do yourself a huge favor and get JC, Max Velocity or any other qualified instructor lined up and get it! Your life and the life of others may very well depend upon it.

Otto van Bismarck: “The fool learns from his own mistakes while the wise learn from others’ mistakes” 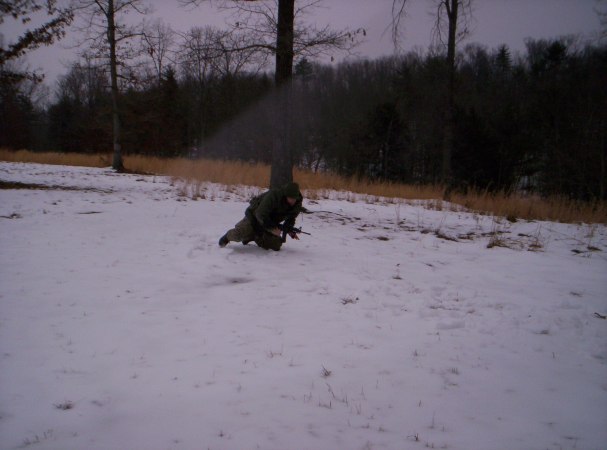 I attended Mason Dixon Tactical’s RBTEC weekend class with instructor J.C. Dodge February the 8th and 9th 2014. If I was to describe the event I would have to go with eye opening and I mean that both literally and figuratively. There are few things that will catch the eye like a full auto muzzle flash right in front of you and figuratively as realizing that you would be seriously maimed at best when you see it. I went into the class under the impression I could handle any threat because I could shoot and had read some books, I was wrong. I can’t think of many things more important than learning how to effectively and realistically defend you and yours. I went in with blinders on and not prepared for a 360 degree learning experience. This class not only taught me the correct procedure for a combat situation but how to adapt to it and above all increase chance of survival. I can’t thank JC enough for what he taught me and plan on continuing to attend and learn more about what I thought I already knew. 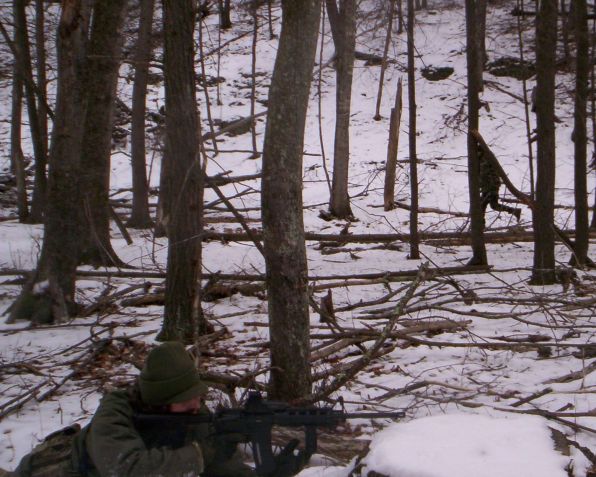